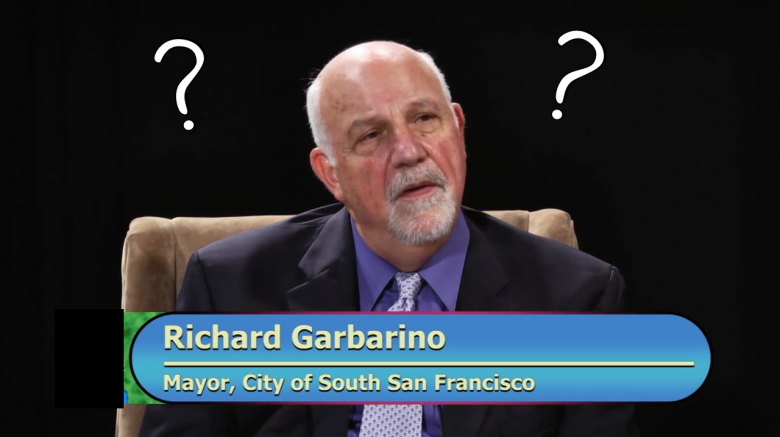 On July 30th, South San Francisco Mayor Rich Garbarino released a statement in response to the recent surge in protests against extrajudicial killing of Black people and systemic racism. In his statement, he stated that he was “suggesting…an intentional effort at ensuring systemic change.” He also referenced that “there is more than one virus to cure in our cities today,” implying that the current state of racism in policing is just as harmful as the current COVID-19 pandemic. The Mayor’s affable statement on systemic change may sound like a step in the right direction, but thus far, have not been accompanied by meaningful action.

Those who have not been following SSF local politics may perceive Garbarino as a champion for progressive change and someone who has been bringing issues around racism to the forefront. The unfortunate reality is that South San Francisco is miles behind cities like Oakland and San Francisco. They have both adopted progressive policies and alternatives to policing long before the recent call for defunding the police.

Cities that have implemented programs as an alternative to policing have had varying levels of success, hinging primarily on their funding from the city. However, in South San Francisco, there has been no visible implementation of programs or jobs that function as alternatives to policing. When it comes to racism and social equity, South San Francisco has taken little to no action. Having moments of silence in board meetings are kind gestures, but this is not the change that the people of South San Francisco are looking for. This is not the change that the San Mateo County families of Errol Chang, Chinedu Okobi, Yanira Serrano, Derrick Gaines, and many others who’ve been affected by incarceration and over policing deserve.

Given the council’s inaction on these issues, the formation of a new commission on Race and Social Equity is met with more skepticism than hope. Gabarino writes,

“To the mayors of cities who have seated your commissions, panels, and review boards to deal with the issues of today, I applaud you and assure you we will learn from your work. To those who have not taken these steps, I encourage you to do so.”

In this statement, the mayor describes the relationship between city residents and the city government as intimate and close, and one that values the resident’s rights to exercise free speech. What he failed to publicly acknowledge was that the formation of a new commission was the result of pressure from residents who took to the streets, attended a round table discussion with city leaders, and submitted written or phoned public comments to board meetings (all of which went unread).

CHANGE SSF requested that this board or commission have financial backing, the power to change policing practices, and hold violating officers accountable to the fullest extent. Unfortunately, these requests were not honored in the formation of this new commission. The Mayor also failed to acknowledge that his roundtable was not advertised to the public and that a public town hall was initially requested, but not granted. He did not mention that public comments that were submitted in the month of July were silenced during the council meetings. Many felt that this was an intentional attempt to control the narrative around police brutality and to silence the call for funds to be redirected from the police budget to social programs that help South San Francisco’s most vulnerable and oppressed populations. The mayor’s claim to learn from other cities seems flimsy when other cities like San Mateo and Daly City have already held numerous public town halls on policing during the month of July and late June. Both Oakland and San Francisco have decided to remove officers from their schools, with the latter announcing a 120 million dollar cut to their police department in the next two years. One has to question if the city council intentionally silenced public comment and delayed holding public town halls (not a roundtable discussion with a select group of people) with hopes that the protests happening around the country would simply fade.

Questions that remain for the development of a powerless commission are:

In referring to systemic change, Gabarino states, “It may not be as quickly as some would like, but will be intentional, sustainable, effective.” While it must be acknowledged that the process of divesting from policing and investing in alternatives is a long process, the city has not yet taken any material steps to begin this process. The question of whether or not over-policing occurs in South San Francisco and in America–or if the police need dramatic changes and not soft reforms–should not be up for debate during these commission meetings. This conversation has already been held. The work of Alex Vitale and Michelle Alexander have answered these questions clearly and thoroughly. Rather, the commission needs to begin by immediately taking steps to concretely and genuinely end systemic racism and over-policing by laying out a plan for the city’s eventual divestment from over-policing and carceral punishment.

It also needs to be acknowledged that the call to end police brutality and to invest in resources for the people has long existed before the unjust slaying of George Floyd and the formation of the Black Lives Matter movement. This call was being made during the two decades of Garbarino’s involvement in city council, yet it is only now that he wrote a letter acknowledging the presence of systemic racism. He even went a step further and admitted to his own privilege as a white person. One has to wonder if Garbarino, who is running for reelection this year, has undergone some kind of progressive transformation in the past month and is serious about making systemic change or if he is merely pandering to the growing progressive voice in South San Francisco. Surely the people of South San Francisco, after having Garbarino represent them in City Council for over 18 years, deserve more than just a progressive-sounding letter and the formation of a commission with no real power. They want changes in policy. They want the city to invest in people, not in over policing.

With the commission scheduled to have their first meeting on August 8th, what concerns would you want our representative from CHANGE SSF to raise? Feel free to send a direct message on any of the social media accounts (Twitter, Facebook, Instagram).

URGENT: we need all hands on deck this Monday to s

[CW: Descriptions of police brutality] In the past